TOP 10 Rare Gemstones In The World

Shall we play a mind game? Okay, Lemme find what’s in your mind by asking a simple question.  Just think about the rarest gemstones in the world.  What comes in your mind? Shall I guess… yeah! The same Diamonds, Rubies, Emeralds and Sapphires.  Have you ever heard a gemstone rarer and expensive than these gems? You will be flabbergasted when you finish reading this article.

Let us take a look about the rarest gemstones in the world.

Tanzanite is one of the rarest blue and violet variety gemstones as it is found only in Tanzania that too only in a very small mining area around 7km near Mererani hills.  It is the composition of epidote mineral group that is made up of calcium aluminium hydroxyl sorosilicate, caused by small amounts of vanadium.  Tanzanite was early called as “Blue Zoisite”, later it was renamed as “Tanzanite” by Tiffany&Co to apprise the rarity and single location of the gem.  It is one of the official birthstones of December.

Black opal also comes under the rarest gemstones in the world.  It has its origin in the mines of lightning Ridge in new South Wales of Australia and from some parts of Ethiopia.  It has a darker body colour which varies from dark grey to jet black.  This unusual darkness of the stone appears by the amount of carbon and iron oxide present in it.  It is often known as the birthstone of the month October.  Carrying a black opal, can lit up light in your life.

Alexandrite is the colour change variety of the gemstone chrysoberyl.  It is considered as the rarest gemstones in the world.  Its origin belongs to the Ural Mountains in Russia.  The colour changing characteristics of the gemstone makes it different from the chrysoberyl.  The colour changes from calming green in daylight or fluorescent light to brown or purplish red in the candle light or incandescent light.  Buy a Alexandrite gem to become a star in your respective field.

Benitoite is quite rare and expensive when comparing to other gemstones.  It is found in very few areas like San Benito country, California, Japan and Arkansas.  It usually appears in the blue, purple, pink colour and even sometimes zoned.  It is known as official state gem of California.  Under short wave UV light, benitoite appears in blue to bluish water in colour and under long wave UV light, white benitoite fluorescence as green.  Wanna be a sparkling gem in the real life, then own a piece of Benitoite gem.

Taafeite is one among the rarest gemstones in the world.  The “Taafeite” gem is named after the discoverer Edward Charles Richard Taaffe.  It is found in the alluvial deposits in Sri Lanka, southern Tanzania and China. Taafeite is often misunderstood as spinel, but a visible double refraction property of Taafeite makes it distinct.  It occurs in green, pink, blue, bluish violet and in red colour.

Demantoid garnet belongs to the variety of the andradite mineral which is the member of garnet group of minerals.  The name “demantoid” is derived from the French word “demant” meaning “diamond” because of the high brilliance and dispersion characteristics of the gemstone similar to diamond.  It is primarily occurring in green colour but the colour may also vary from a very strong yellowish green to emerald green.  In the queue of green gemstones, after emerald and peridot, demantoid garnet comes behind it.  Demantoid garnet mainly occurs in Russia but now it is also mined in many countries including Iran, Pakistan, Italy, Madagascar and Canada.

Padparadscha sapphire is one of the rarest gemstones among the sapphire variety. It is usually found in Sri Lanka and in some parts of Vietnam and east Africa.  Its colour varies from pink to orange sometimes it occurs in unique mix of pink and orange colour.  It is the birthstone of the September month.  The name Padparadscha is derived from the Sanskrit word “Padma Ranga”, Padma means lotus and Ranga means colour.  It is one of the most loved gemstones among all the gemstone collector.  Be luckier, by grabbing the Padparadscha sapphire.

Besides being rare, Jadeite is one of the most valuable gemstones in the world.  It belongs to the variety of pyroxene minerals.  The colour of the jadeite gemstone varies from apple green to deep jade green.  Jadeite is often recognized as the gemstone “jade” (stone of the lions in the Spanish) while another gemstone “nephrite” also shares the same name ‘jade’.  It also occurs in blue-green colour like the “Olmec Blue” jade.  There is a great demand for jadeite gemstone in China, so it remains a great market for it.  It gives a beautiful matte finish look for your jewellery.

Grandidierite is a most popular and extremely rare gemstone that was named after a French explorer “Alfred Grandidier”.  It is mostly found in the regions of Madagascar where it was originally discovered in 1902.  Its colour varies from cyan to turquoise and bluish green.  Grandidierite can be distinguished by its property of trichroic pleochroism which means it can show different colours viz. dark blue-green, dark green or sometimes colourless or very light yellow in colour.  It suits well with any type of jewellery. 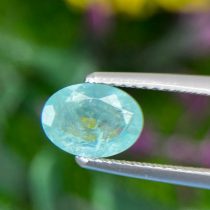 Red beryl and rubies are often confused with the colour but they both are completely different gemstones.  As being rare, it is found only in the USA at Wah Wah mountains in Utah region.  Its colour varies from pink to deeply saturated red.  It is called early as “Bixbite” named after its discoverer, Maynard Bixby.  But it is later renamed as red beryl not to confuse with the mineral bixbyite. It looks stunning with all type of cut and can be easily fix with any jewelleries like ring and pendant.

Still want to discover many gemstones. Just take a peep through our website to find your special and dearest gemstones.  Thank you!!

Become a preferred subscriber and get 10% OFF your first purchase.